The 1861 UK census lists Thomas as 6 years old, living at 28 Charles Street, Sheerness, the home of his maternal grandparents Thomas Richards a blacksmith (born Plymouth Devon) and Maria nee Frost 52 years  (born Plymouth, Devon).   His mother Maria Briggs (nee Richards) a widow is listed at her workplace 15 Union Rd, Sheerness where she was a servant in the house of Dr. Edward Swales and his wife Mary.
In 1871 Thomas 15years old is lodging with his mother at the home of Dr. Edward and Mary Swales, 38 High Street, Sheerness.

We don't have a lot of information on Thomas. F. R's younger years but by 1881 Thomas at 25years of age was a master tailor and boot repairer employing 3 men and 2 apprentices.  He married Ellen Ann Baskett (my name sake) on 19th October 1880 and they lived at 41 High Street,  Sheerness.  They had five children namely:  Nellie Florence (1882); Daisy Maria (1886); May Victoria (1888); Charles Edward Francis Briggs
(1889) and Frank Briggs (1894).  I have been lucky enough to have had contact with grandchildren of Nellie, Daisy, May and Frank.   Franks' son Bernard and daughter Margaret met with us a few years ago while we were in the UK as did granddaughter Vivien.  Vivien happily shares information and keeps in touch by email.

1891: the family has moved to 182 Battersea Road London and a further move by 1901 places them at 41 Fratton Road Landport, Portsmouth.   We don't know what prompted the move; the usual catch phrase for migration is 'work' so I guess we'll stick with that.  From this address Thomas continued his work as a master tailor and boot repairer until he died on 11th February 1904.  Cause of death 'apoplexy'.

We suspect Thomas may have had a previous stroke or other ailment which affected him emotionally/psychologically as well as physically.  I have a letter from Margaret (daughter of Frank) in which she says '...according to dad (Frank), if anyone spoke at the table he (Thomas) would hit them around the head with his crutch. Frank then said  ".. I hate all Yorkshire men because that's where his father came from". This is strange because although Briggs is well known as a Yorkshire name - his father was born in Sheerness.  So it seems Thomas wasn't a loving father figure. Again this reaction could have been a side effect of illness.

I have three images of a man who I was told is Thomas. F. R. Briggs but we have no way of proving it.  I'm placing them here hoping that someone who is researching the same branch with come across this blog and recognize the person in the photos. 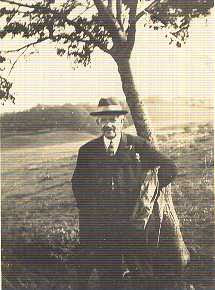 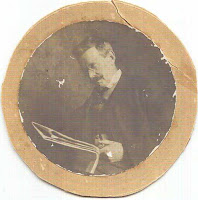 Note:
1881:  Maria Briggs now 42 yrs, is at 8 Beach Terrace, Sheerness and listed as the owner of homes. Lodging with her is Dr. Edward Swales 51yrs and servant Eliza Batt 30yrs.   Maria and Dr. Swales married in 1885 and lived in 3 Trinity Road, Sheerness.  The Last Will and Testament of Edward (1899) and (Maria (1907) have information regarding other family members.


Next: Charles Edward Francis Briggs son of the above.
Posted by Ann Spiro at 01:13 No comments:

Marriage:  On May 8th 1854,  in the parish of Minster Sheppey, Kent, Thomas Briggs a blacksmith aged 24 years married Maria Richards aged 22yrs (born 1831 Devonport,Devon)). Three witnesses are listed (1) his father Thomas Briggs (Snr) a gardener (2) Maria's father Thomas Richards a blacksmith and (3) Maria's mother Maria Richards nee Frost.  The Richards family had moved from Plymouth Devon to Gillingham Kent before their next child was born in 1838.


Sadly the mother of Thomas Briggs is not listed on his marriage certificate so we assume she was deceased at that time.  After all if the minister was good enough to list Maria's mother then he would also have listed the groom's mother had she been living.

Cause of death: certificate states 'purpura (haemorrhage)'.  Unfortunately the doctor did not  list what he thought may have caused this purpura.  Being an RN I knew something about purpura and have read a lot more about it since seeing his death certificate including many articles on diseases that occurred in that area at that time. Just one of the hudnreds of articles to peruse is http://kentarchaeology.ac/authors/004.pdf.   I don't want to start a discussion about it on here as heaps of information can be found on the Internet and none of the articles can help us decided what caused Thomas' purpura, we can only speculate.

Burial: The Holy Trinity, Sheerness, parish burial register states Thomas was buried on August 12th 1854 but does this mean he is in the Holy Trinity Churchyard or another churchyard?  Sheerness local newspapers did not start being published until 1858 so we cannot search there for a death notice or obituary. I doubt he was cremated.


Brick Wall:  I have spent many years searching for Thomas' birth
records and have also enlisted the help of professional researchers and staff from the Kent libraries. These records have not come to light, at least not in Kent.  It would have been so easy if his mother's name had been listed on his marriage certificate with (deceased) after her name.  We have no proof that he was born in Kent, no siblings to trace.  I continue to search in Kent and in surrounding counties. 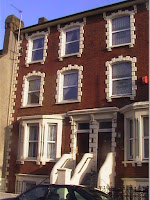 Maria: When Thomas' died his widow Maria was only a couple of weeks pregnant with their son Thomas Francis Richards Briggs who I will talk about in my next blog.  Maria and her son lived with her parents in Sheerness and Maria was housekeeper for Doctor Edward Swales and his wife Mary (died June quarter 1871).  Maria didn't remarry until 1885 when she married Dr. Edward Swales (born Helmsley,Yorkshire) and they lived at No:3 Trinity Road, Sheerness.  When visiting Sheerness a few years ago I took this image of the house (with the owners permission).  The house is opposite the Holy Trinity Church. 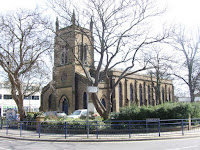 My next post will feature Thomas Francis Richards Briggs, the son of Thomas and Maria.
Posted by Ann Spiro at 21:50 No comments:

The surname Briggs was registered with The Guild of One-Name Studies in 2009.This is a very common surname and I am aware that this is too large a project to attempt on my own. I will do what I can to make this project viable and to do that I am happy to have other researchers submit and share their own BRIGGS surname information.

To date I have contact with cousins in the UK plus nine other Briggs researchers. I have launched a Briggs Study drop box and inside the box is a folder for each researcher who contacts me - they enter their information and this is readily shared between us.  This includes lists of BMDs, Wills,  Probates amongst others. 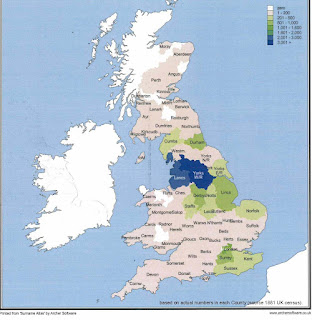